Being a new professional in any field can be difficult—the feeling that you’re an imposter or shouldn’t make waves can be strong. This has certainly been true in my experience working in libraries, and it’s understandable. As a new librarian, your colleagues may have years of professional experience on you, and when they say, “We already tried that and it didn’t work” in response to your idea, who are you to argue?

Taking on that feeling of imposter syndrome and working with your colleagues to make productive changes at your library could be the subject of an entire workshop. However, I would argue that, despite the challenges, new librarians are also at an advantage in some important ways when it comes to inspiring change at their libraries. New librarians often can skirt years-long animosity between departments or organizations and the library. We can draw on our recent MLIS experiences to inspire our colleagues. And our interest in trying new things is seldom a surprise, and therefore may be more willingly accepted by our more seasoned colleagues.

As a new librarian, you may be interested in taking advantage of your “new person” status to introduce meaningful programs at your library. I would argue that a sustainability initiative would be a great candidate for this attempt. There are plenty of reasons why tackling sustainability initiatives should be a top priority for libraries, archives, and other information agencies. Evidence shows that the atmospheric concentration of carbon dioxide, the primary greenhouse gas responsible for the climate change crisis we are currently experiencing, is higher than it has been in the past 800,000 years (https://earthobservatory.nasa.gov/Features/GlobalWarming/page3.php). Americans are the second highest contributor to CO2 levels in the world, although we make up only 4.4% of the earth’s population (http://databank.worldbank.org/data/reports.aspx?source=2&series=EN.ATM.CO2E.PC&country=#). The effects of these high CO2 levels has already had devastating consequences for many around the world, and  threatens to be catastrophic for the entire planet. The effects include sea level rise, increased risk of extinction for 25-35% of plant and animal species, collapse of entire ecosystems, and many other negative effects (https://www.nwf.org/Eco-Schools-USA/Become-an-Eco-School/Pathways/Climate-Change/Facts.aspx). In the face of these facts, it’s very difficult—at least for me—to sit by and do nothing, especially when I see ways that my library can make a difference. New librarians who feel the same way might choose a sustainability initiative as a way to begin experimenting with introducing new programs in their libraries.

You might be thinking, “Well, that’s all well and good, Mandi, but my library would never go for that.” It’s true that, even if you do feel strongly that sustainability should be addressed immediately in libraries and other institutions everywhere, it doesn’t mean that your own colleagues are ready to take on these issues. If it’s helpful, I also experienced some initial resistance at my library, and I’m happy to say that the library is now becoming an important sustainability partner on my campus.

I work in an academic library in the Midwest. Over the summer of 2017, I became increasingly aware of the magnitude of the problem of climate change, and I couldn’t help but notice the unsustainable behavior happening all over on my campus. Earlier in 2017, my university had hired a sustainability officer, and I decided it couldn’t hurt to meet with her to see what the library could do to help.

Besides being very excited to meet someone else who was passionate about reducing our impact on the environment, I was inspired by my meeting with Jenn to take action. After our initial conversation, I polled all of the library staff to see who would be interested in forming a sustainability interest group, not expecting much response. I was surprised to find that seven of my colleagues wanted to be involved! At our first meeting, we were overflowing with ideas about how to improve the library’s sustainability. From recycling barely-used printer paper and fixing our bathrooms’ leaky faucets, to encouraging staff to bring their own dinnerware to library parties to avoid producing waste, we found many ideas for reducing the library’s environmental impact that wouldn’t cost the library a cent. Our efforts resulted in collaborations with the custodial staff as well as the student sustainability group on campus. Despite initial resistance, the custodial staff agreed to reduce the number of garbage bins and increase the number of recycling bins in our busiest library lab. In addition, I co-authored a local government grant with Jenn to add two plastic bag recycling receptacles to the library’s first floor, and we were very pleased to win the grant!

Those library staff members who had not wanted to join the sustainability interest group did not initially agree with some of the ideas the interest group presented. We suggested that the library might purchase compostable dinnerware for parties, rather than dinnerware composed of non-biodegradable plastic, such as polystyrene foam (a.k.a. Styrofoam). We were told the cost was too high, and that it wouldn’t be possible. However, weeks later, in preparation for our library holiday party, I was surprised to receive an email from our Program Planning staff member asking how we could get a compost bin, as they had ultimately decided to go with compostable dinnerware! This success was compounded when our sustainability officer volunteered to donate additional compostable dinnerware to our party as a thank-you for the library’s  contribution to promoting sustainability this semester! 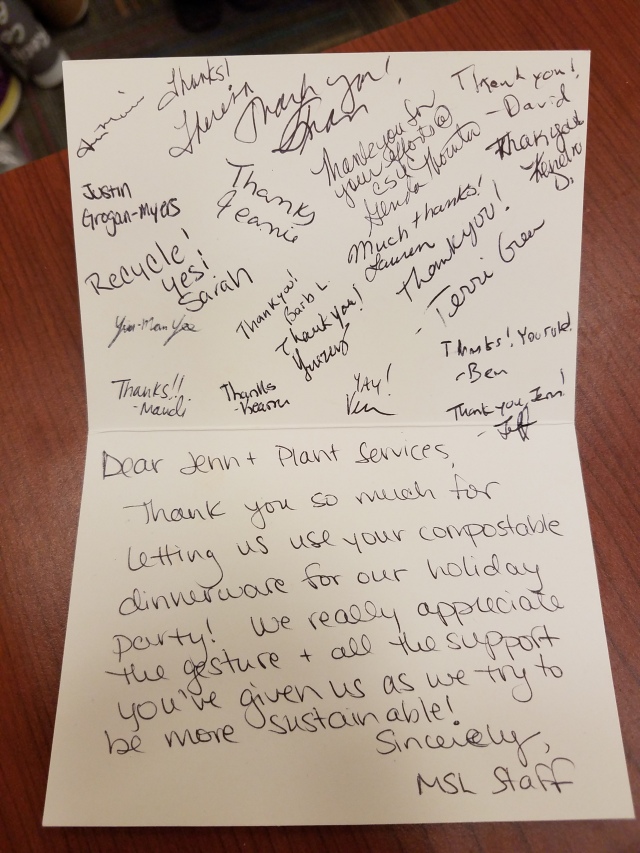 I never thought I would be so interested in the placement of garbage bins and the material composition of certain kinds of dinnerware, but the process of working with my colleagues to make these changes has been rewarding and exciting. These are small steps, but they’re bringing the library staff together toward a common goal. And, in the process, the library is developing campus relationships and increasing our profile as a forward-thinking, environmentally-responsible leader in our institution.

Facilitating sustainability initiatives at your library is just one way to make a difference (and one I happen to believe is incredibly important), but it requires perseverance, political diplomacy, and collaborative skill. Tackling sustainability efforts gives new librarians the opportunity to gain experience developing and sharing new initiatives, and it allows the entire library staff to join in making a difference, not only for a better library, but for a better world.